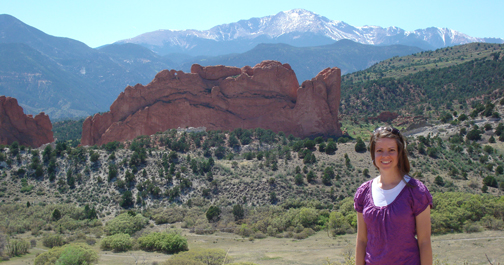 NOTE:  I originally wrote this post on May 7, 2012 on a different blog.  We decided to shut down that blog, but I wanted to keep this post because I knew it impacted many.  Therefore, I decided to republish it here.

As many of you know, we recently moved to Colorado Springs.  This past year of our lives has been marked with one word…transition.  I officially resigned my job as a Physical Therapist at the end of July.  Then we moved into a small Toyota RV and lived in 125 square feet of space for 3 1/2 months…full time.  We downsized our earthly belongings and everything we needed fit in either our small RV or our Chevy Aveo.

It was our dream to travel and speak across the country in a RV.  However, things didn’t work out as we thought or planned.

The bookings didn’t open up and we realized that the RV lifestyle just wasn’t for us.

Living in a RV, whether it is new or old, will require repairs and maintenance which neither of us have the skills or interest to do.   It also cost more to stay in RV parks than we planned…even with a 50% discount from Passport America.   Plus, it was difficult to do our online work and writing in such a small living space with limited access to the internet.  Everything took longer and was much more difficult.

And we thought the speaking engagements would open up in the areas we were traveling to since we were in their area and they didn’t have to pay travel costs.  Well, it just didn’t work out that way.  Most churches and schools plan far in advance and so they were already booked through the months that we would be in their area.  We even sent several mailings in advance…and still nothing.  Therefore, the RV did not seem to make sharing our messages easier either.  In fact, we still had to fly out of Florida to go and speak in Pennsylvania at a snow camp in February.

On top of that, we planned to have a friend renting our house while we were gone.  Her fiance’ was being deployed to Afghanistan and she wanted to live close to her mom while he was gone.  We left November 14th and she was supposed to move into our house at the end of December or beginning of January.  Well, just 8 days after we left in our RV, we got an email saying that it was no longer going to work out.  Her fiance’ was no longer being deployed because Obama canceled his orders last minute and so she no longer needed to rent our house.  We were excited for their family as it would mean they wouldn’t have to be apart, but it meant we would have to pay our mortgage AND our living expenses in the RV at the same time until we could find another renter…which ended up being several months later.

And I was confused.

I had resigned my job as a P.T. to travel and minister and speak full-time with CJ and then…nothing.  Silence.  It felt like God was silent.

Have You Ever Experienced a Time When God Seemed Distant or Silent in Your Life?

I think we all experience moments when God seems distant and/or silent in our lives.

During this current season of transition in my life, it has often felt like I can’t see clearly what the next steps will be.  I have a strong relationship with Jesus and have had seasons where I could sense His voice and leading clearly in my life.  But, not so much right now.

The picture I have often gotten is of a fog descending over me.  I can’t see anything except what is right in front of me…the present moment.  I don’t know where we will be going and what we will be doing.  I don’t know how we will pay the bills (although we have been able to pay every one of them thus far).

And I Won’t Lie to You…It Has Been Hard.  Really Hard.

I like to be in control and have a plan.  It’s difficult to walk by faith.  I never realized how much I depended on my regular paycheck from the hospital until I didn’t have it.  I realize now that I was depending more on that steady paycheck than I was on God.

I’m not saying that everyone needs to quit their jobs and venture out in faith to learn these lessons.  This is simply the path that we have been on these last few months.

And as hard as it has been.  It’s been good.

There was a root of self-sufficiency in me that is slowly being uprooted.  I’m still in the process, but God is teaching me to rely fully on Him and not on my own efforts.  He is proving Himself to me over and over as He provides for us something that I never could.

But, Today I Feel the Fog Again

Circumstances of this week got to me.  Doubts about how we would make it financially began creeping in again.  Insecurities within me began creeping to the surface again that I thought were gone.  I’m lonely for my friends and family and want to see God open up deep relationships for us in our new location.  And I’m still grieving the loss of our friend Julie Kurrle and her son Timmy.

So, when I woke up to a rainy day (our first since arriving in Colorado Springs) it seemed to mirror my emotions today.  Blah.

Then, I looked out our front window and saw something amazing.

Normally we can see Pikes Peak VERY clearly from our front window.  But, today…nothing.  Literally.  I could not see the mountain AT ALL.  It was almost as if it wasn’t there anymore (see picture below).

And instantly, God spoke to my heart.

Just because I can’t see Pikes Peak today doesn’t mean it’s not still there.  The mountain is still there.   I know it is because I have seen it so many times already.  It is just the clouds of the day that have kept it hidden from me.

And So it is With God Sometimes as Well.

There are those bright sunny days where everything seems to be going my way and I can sense God’s presence and His voice leading and guiding me so clearly.  Then there are other days that seem cloudy and gray, where God seems distant and silent in my life.

It doesn’t mean that God’s not there.  God is still there.  He has proven Himself to me over and over again.  It’s just that the “clouds” of the day have descended over me at the moment.

And so in those moments when God seems distant or silent, it comes down to trust.  Trusting that He’s still there, just like I trust Pikes Peak to still be there even though I can’t see it clearly from my window today.

What does it mean to trust?  Well, here’s a definition from the dictionary…

1. reliance on the integrity, strength, ability, surety, etc., of a person or thing; confidence.
2. confident expectation of something; hope.
3. confidence in the certainty of future payment for property or goods received; credit: to sell merchandise on trust.
4. a person on whom or thing on which one relies: God is my trust.
5. the condition of one to whom something has been entrusted.

And so today, in the midst of the fog, I trust that God is with me.

“Never doubt in the dark what God told you in the light.” -Raymond Edman

“Never be afraid to trust an unknown future to a known God.” -Corrie Ten Boom

“Trust in the Lord with all your heart and lean not on your own understanding; in all your ways submit to him, and he will make your paths straight.”  Proverbs 3:5-6